One Page Adventure: The Mirror Dungeon

As a GM, you sometimes just have to write your ideas down – they may not be fully formed, but they could still serve for inspiration later on. This is was our very first one page dungeon we created for the dungeoncontest 2017. However, we never submitted it, because we felt the idea of using mirrors to create corridors doesn’t quite work. Still – once we tested the dungeon it was great fun, so we hope you’ll enjoy it too!

The marvellous ruins of the Kumpo people can be found all over the island of Temitia. Their culture has vanished several centuries ago and is nowadays mostly remembered for their beautiful silver craftsmanship. Kumpo mirrors fetch a high price from collectors and scholars all over the world. Yet, the story of their disappearance is still a mystery. Ancient murals show the Kumpo priests leading their people into a new world of light – but no there are no records of them ever resurfacing anywhere else. A new excavation might now shed some light on the fate of the Kumpo: deep in the bowels of the palace city, a silver door has been discovered. Its inscription reads: I will open when the moon is high and lead you to the promised land of silver and light.

In this one-page dungeon, a small team of explorers enter the old ruin in hope of discovering the fate of its constructors. What happened to the Kumpo people? What is the promised land, and how can it be reached? Can modern minds even comprehend the magic of “The Mirror Dungeon”? 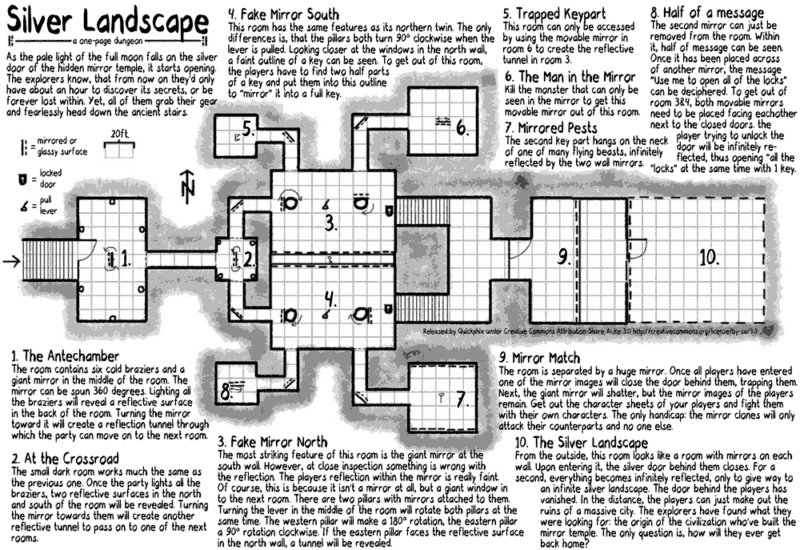