“Wario Blast featuring Bomberman!” is one of Nintendo’s first crossover games. The game was originally released in Japan as “Bomberman GB” and had nothing at all to do with Wario. Only with the release in North America and Europe was Wario added as a protagonist. This makes the game only the second one in which Wario appears as a playable character.

The story is limited to a short paragraph in the game manual (see here). Wario finds a portal into the bomber dimension and his first thought is to steal all the bombs in this world and hire the bombers as his henchmen for his dirty deeds.

The only reason this story is of any note is because it cemented the connection between Wario and bombs for the first time. Bombs don’t really play a role in the mechanics of most Wario games, but from this game onwards, Wario’s guest appearances almost always connect him to bombs (e.g. Wario’s Woods, Mario Party, Mario Kart, Mario Smash Football, etc.). 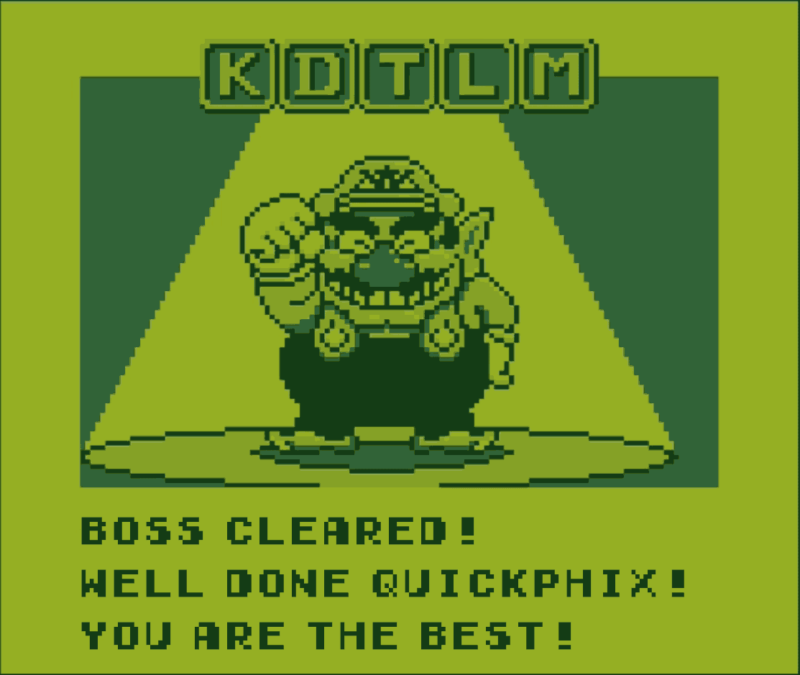 The game’s mechanics are practically identical to the core mechanics of any other classic Bomberman game. Players place bombs in a chessboard-like playing field, which then explode into a cross shape, destroying blocks and players alike. Certain blocks cannot be blown up and serve as cover. Last man standing wins. The usual gameplay loop of any Bomberman game usually looks like this:

The formula is as elegant as ever: blasting blocks gives you power-ups, but also brings you closer to your opponent. A slow and calculated play-style is safer, but also increases the chance of your opponent being able to trap you or collect more power-ups. The last phase usually plays out as a cat and mouse game. The player with the better nerves and power-ups will usually win. Wario Blast adds very few mechanics to the core gameplay – mainly boss fights, permanent power-ups and different stage hazards. The boss fights work very well for the most part, since each boss fight requires you to master one of the game’s core mechanics. For example, the level 2 boss forces the player to learn the detonation time of his own bombs. To beat the level 4 boss, players must learn how to create large chain detonations and the final Boss requires you to use most of your permanent power-ups at once.

Speaking of the the permanent power-ups: they are a nice idea, but weren’t implemented very carefully. Sure, they create an easier learning curve and reward the player for mastering a level, but the last two also kinda break the game. The “Trouncer” and the “Moto” destroy the delicate balance of the original bomberman formula. Thanks to the Trouncer, the player will automatically win any duel, because it enables him to stun the opponent. This completely eliminates time pressure and the need to collect power-ups. The “Moto” also allows the player to skip the indestructible blocks, eliminating any strategic decisions when planning your route. All the player has to do now is drive to his opponent as fast as possible, stun him and destroy him with a single bomb.

Conclusion: does the game hold up from a modern perspective

Even more than twenty years later, most Bomberman games still follow the same four-phase rhythm at their core. The reason for this is simple: the formula is still very engaging. Wario Blast still serves (not least because of a good sound design) as a short, entertaining distraction – but nothing more. The gameplay becomes repetitive and easy to be interesting, especially towards the end. In addition, the mechanics are simply better suited for a multiplayer game, as it is not that much fun to trick a frankly not that bright AI.